How the Democrats Can Defeat Roy Moore: Run Luther Strange 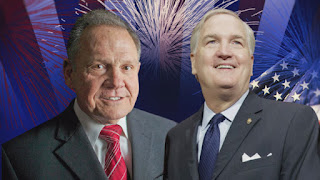 Somewhere deep in the heart of Alabama there are voices being raised in shock and agony, echoing that of the Chicago Tribune’s Rex Huppke, who opined in his column that the victory of Roy Moore over Sen. Luther Strange in the GOP senatorial primary signified what happens when the “sane vs. crazy” elements of America face off in today’s political world: “the latter, in Alabama, prevailed.”


There is no doubt whatsoever that Roy Moore is what might generously be called a “loose cannon.” He is a man who believes that homosexuality should be against the law and that “Putin is right” with his opposition to gay marriage. He believes “it was the Providential hand of God” that put Trump in the White House. He believes there are communities in America today under Sharia law. (”Up in Illinois. Christian communities.”) He professes not even to know what DACA is. He believes 9/11 happened “maybe, just maybe, because we’ve distanced ourselves from the one that has it within his hands to heal this land” and we because upset God by “legitimizing” sodomy and abortion. And of course he famously joined with Trump in questioning Barack Obama’s American birth.


This is the man Alabamans would send to the Senate. As Huppke said, “When Alabama Republicans cast their ballots in the state's U.S. Senate primary Tuesday, a majority of them thought: ‘Yep. This conspiracy-theory-believing religious zealot who was twice suspended when he was chief justice of the Alabama Supreme Court is the best man to send to Washington!’”


And there are Democrats in Alabama suddenly thinking: hey! maybe this provides us with an opportunity to steal a Deep South Senate seat! They are thinking, with logic on their side, that only 262,000 people voted for this jackass in a GOP primary with another 218,000 GOP voters against him. Compare that the the 505,000 who voted for Richard Shelby in the primary just a year ago. The Dems can certainly be justified for thinking: the GOP has a highly polarizing, unpopular candidate! We can get the sane GOP voters to side with us and claim this seat!


That kind of thinking did not work so well in the Clinton vs. Trump race, and it won’t work here either. There might be a tiny possibility that the Dems could succeed and manage to walk away with what surely ought to be a safe GOP seat, but it simply isn’t worth risking placing Roy Moore into the Senate for at least the next three years when the Democrats possess the power to stop him. And they do. The solution is simple.


Although Doug Jones is a moderate candidate who has had some success in Alabama and might engender some support, especially with the backing of Vice President Joe Biden, who intends to campaign for him, and although he’d undoubtedly be a strong senator, the Democratic Party must immediately urge him to withdraw from the race and replace him on the ballot with Luther Strange. There is little to no chance that Strange would enter the race as an Independent and practically hand the seat to the Dems, despite his own distaste for Moore and his lunacy. But if the Dems approached him and offered him their ballot spot, no strings attached, he’d be a fool not to take it.


In a general election, with anyone in the state voting, adding Democratic votes to the returning Luther Strange votes would certainly be enough to overwhelm Moore’s support.


I know, I know: this would be a bitter pill for Dems to swallow. Strange, in his tenure as Alabama Attorney General, opposed gay marriage, abortion rights, transgender rights, Obamacare, and most of what the left holds dear. He was one of 22 Senators to sign a letter urging Trump to pull out of the Paris Agreements. Why on earth should we fight to keep him around? And the answer is simple: Roy Moore. Consider what you wouldn’t give right now to have pretty much any other GOP President in the White House than Donald J. Trump, and you get what I mean. Loose cannons are dangerous. Loose cannons with bully pulpits are more so.


Senator Luther Strange is a terrible thing for Democrats. Senator Roy Moore would be a terrible thing for America. It is the responsibility of the Democratic Party to stop this insanity because the GOP as it is currently constituted simply cannot. They had the President and the Senate Majority Leader campaigning for Strange and look what happened? Moore beat him in August and again in September. America simply cannot afford to allow Moore to win again in December, and if he faces a Democrat in Alabama he will. If he faces Strange and Democratic voters choke down their disgust and vote for their current senator, Roy Moore will finally be able to go to the place he belongs: the same dung heap where all of the political caricatures of the past have retired.